You Are Here: GENESYS 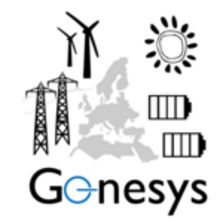 The goal of the project is the further development of a simulation tool. The tool can optimise long-term changes in the energy system by adjusting expansion rates taking into account the short-term dispatch of generation, storage and transmission technologies for load-covering purposes. The aim is to reduce carbon dioxide emissions as far as possible while maintaining security of supply. With the help of different boundary conditions, political, social and economic scenarios are defined and the system changes caused by them are analysed. These analyses are intended to identify stable development paths for a successful implementation of the energy transition in Europe. In addition, political decision-makers should be able to gain valuable insights into the potential impact of political tools within this framework.

As part of the project, the simulation tool GENESYS-1 has to be extended. GENESYS-1 originally was used to determine which system designs were optimal for a 100% renewable based energy system in Europe. The extended method focuses on the optimal development path, including the reduction of coal-fired power generation, nuclear phase-out and network expansion. In this context, the provision of necessary flexibility in the system by means of novel components in the case of the omission of conventional standby power plants as well as location-classified time series of renewable energy generation form important working points within the framework of the project. This is intended to provide a comprehensive picture of the necessary system changes and to identify possible political parameters. Further investigation is focused on the optimal use of long-term and short-term storage capacities for balancing seasonal and weather conditions caused by the fluctuating generation from wind and solar generators.

The software developed within the GENESYS-1&2 projects is published under LGPL open source license.

A scientific workshop, which was held within the context of the projects, serves for a direct exchange among scientists of other working groups engaged in similar questions and simulation tools.