In the „HyFly“ research project, system analyses of distributed hybrid propulsion systems for aircrafts are conducted together with project partners. The project is funded by the German Federal Ministry of Economic Affairs and Energy (BMWi). ISEA is responsible for the design of a high-speed reluctance generator, the corresponding power electronics and the battery system.

The focus of the study lies on the direct coupling of a gas turbine and a switched reluctance generator. Due to its durability and high-speed capability, the reluctance machine is employable in this application. The generated power is used to drive the electrical aircraft motors. A battery storage supports the electrical system, e.g. at start or load changes. The design of the electric drive motors and the corresponding propeller is carried out by project partners in the course of the project. By combining the system components, new aircraft and drive concepts are developed and afterwards compared to existing approaches.

An aircraft application is more demanding for the individual components. Highly variable operating conditions as well as higher requirements for system security have to be considered.

In the context of this project, ISEA is further developing its design tools for switched reluctance machines. The machine model is extended by loss calculation methods, innovative sheet and winding materials as well as thermal models. 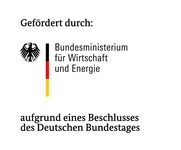